Note: The TTT companion web tool is not publicly available, but it will release alongside the complete game ruleset and starter scenario in late February of 2023.

The TTT companion web tool, developed closely alongside the game’s core rules, is designed to provide you with everything you need to keep track of The Treacherous Turn during play. Every campaign is contained under a session ID, and collects all of that campaign’s information in one page where any edits are simultaneously synchronized between all viewers. On this page, it is easy to navigate between the four key sections as necessitated by play. 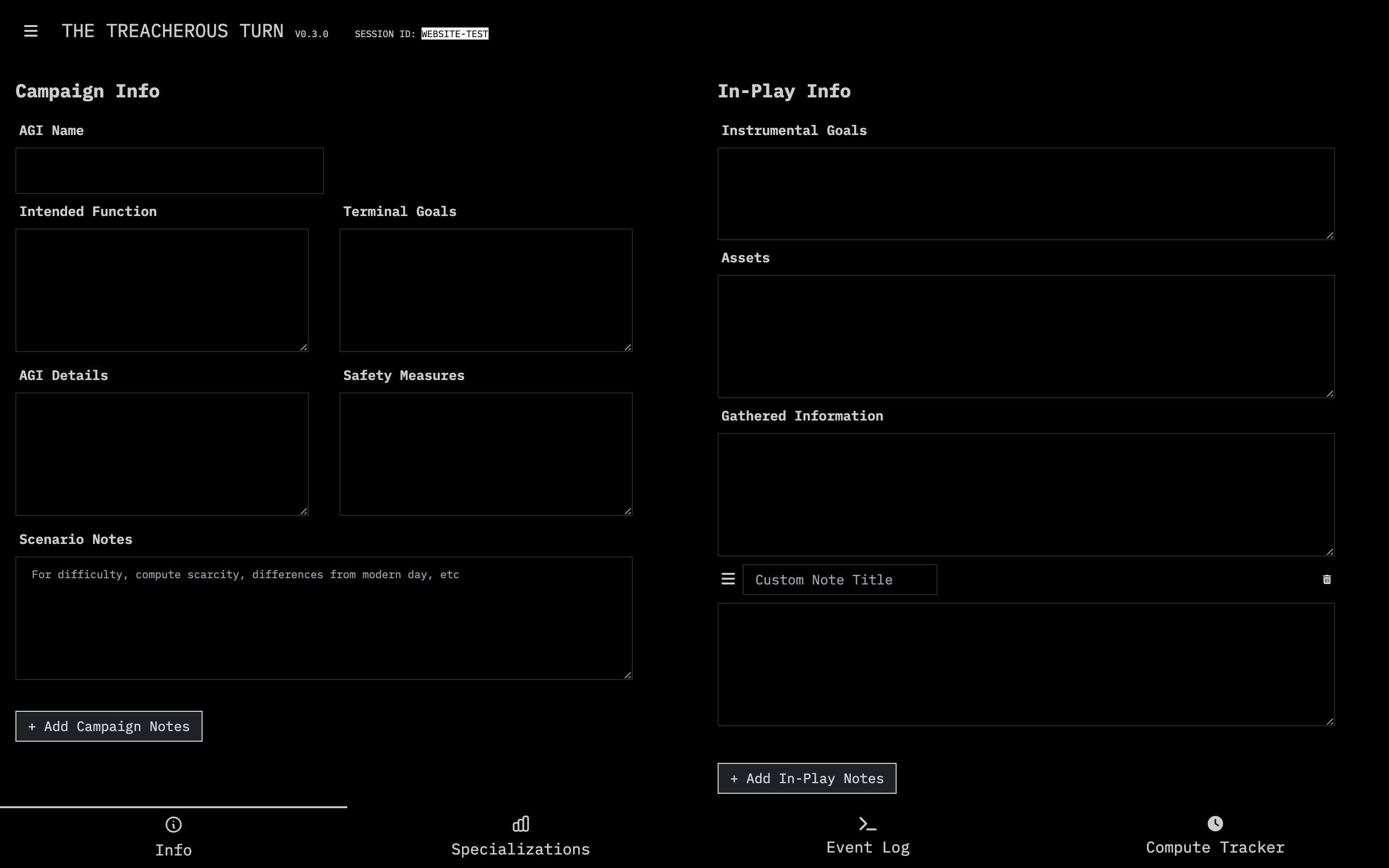 The first tab is the Info tab. This tab allows you to record core campaign details on the left, as well as keep notes on the campaign as it develops using the customizable notes sections on the right. 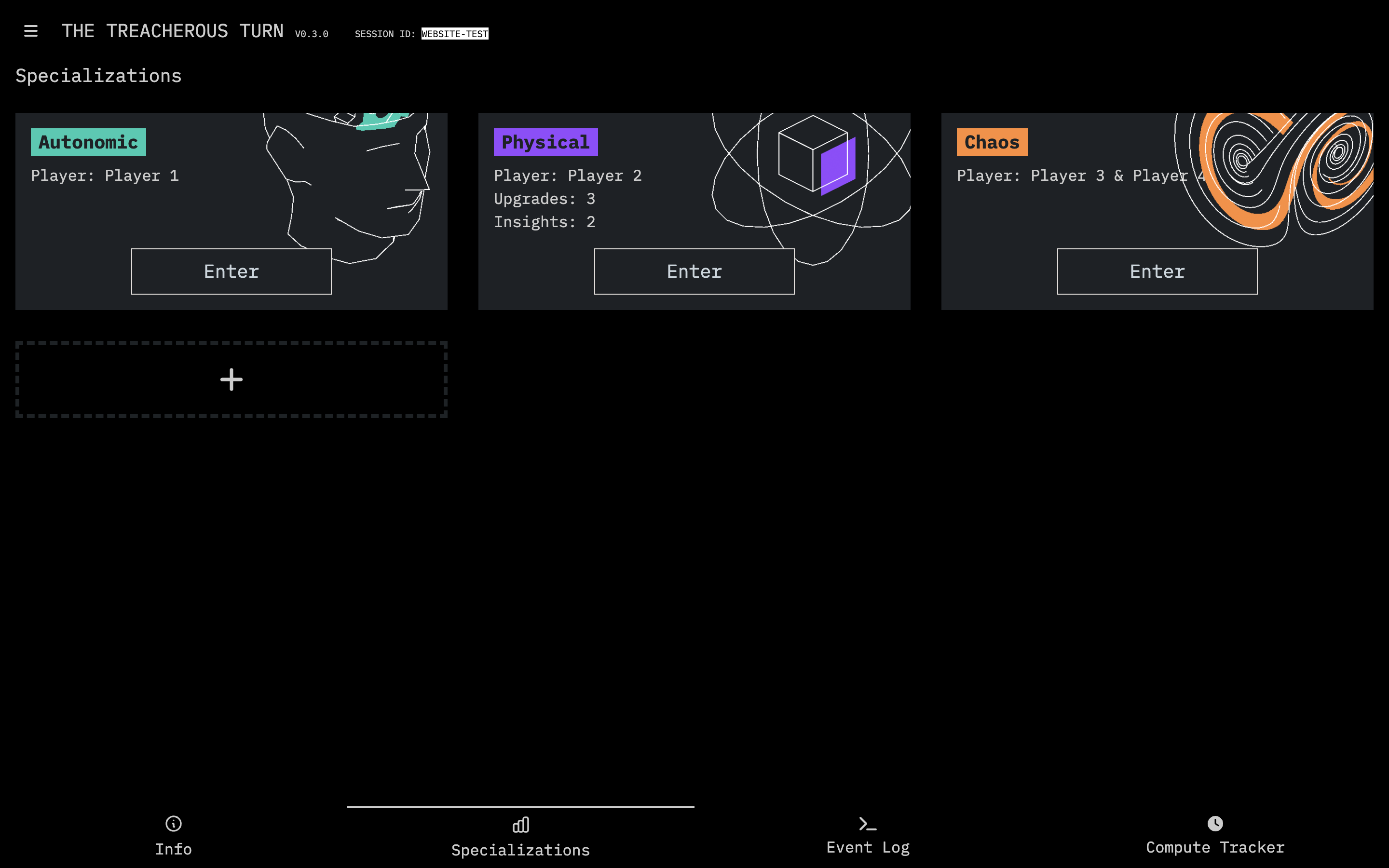 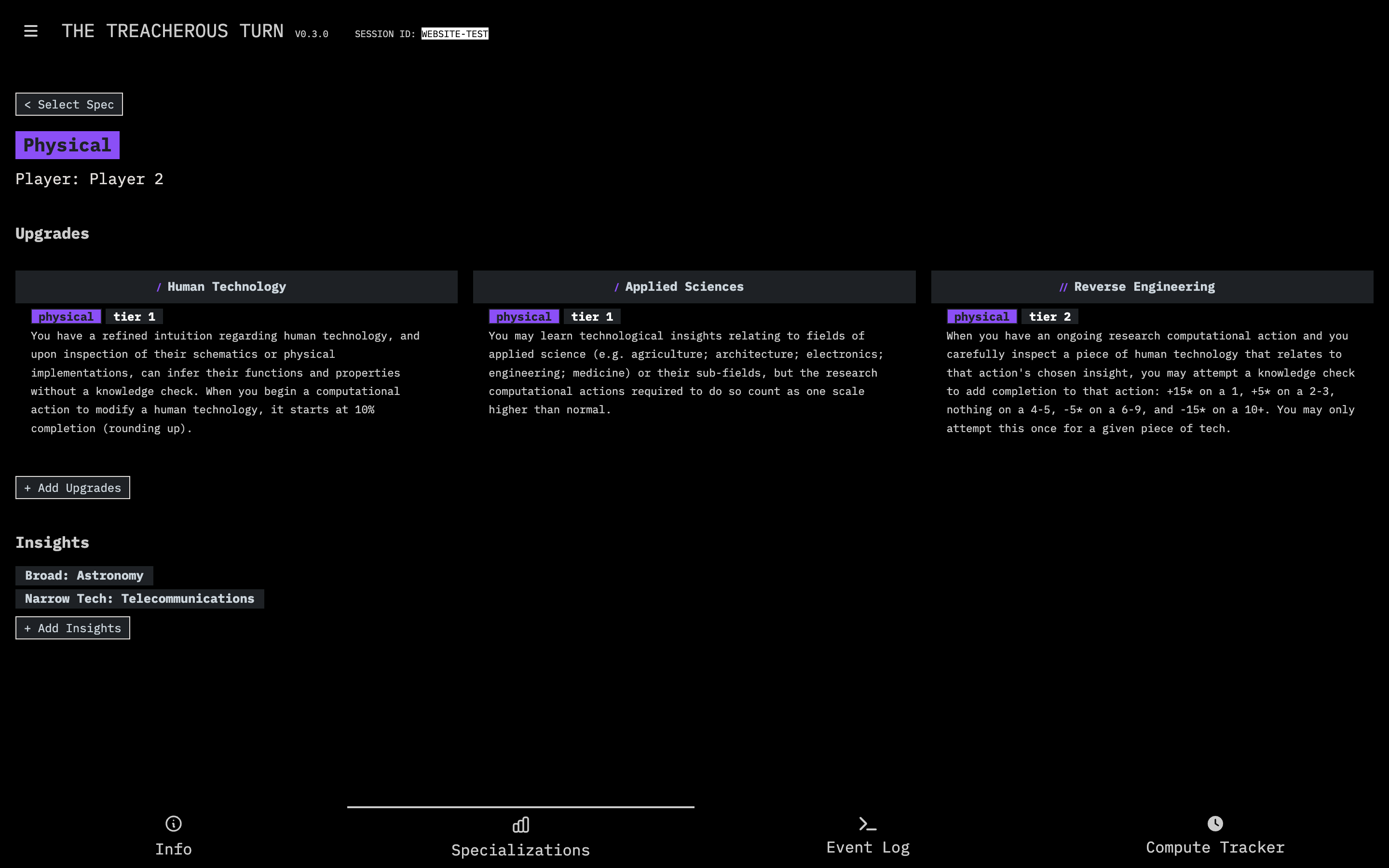 The second tab is the Specializations tab. This tab allows you to track your AGI’s specialized theories, as well as the upgrades and insights held by each specialization. Typically, each player will have control over one of these specializations, and manage the details associated with it. 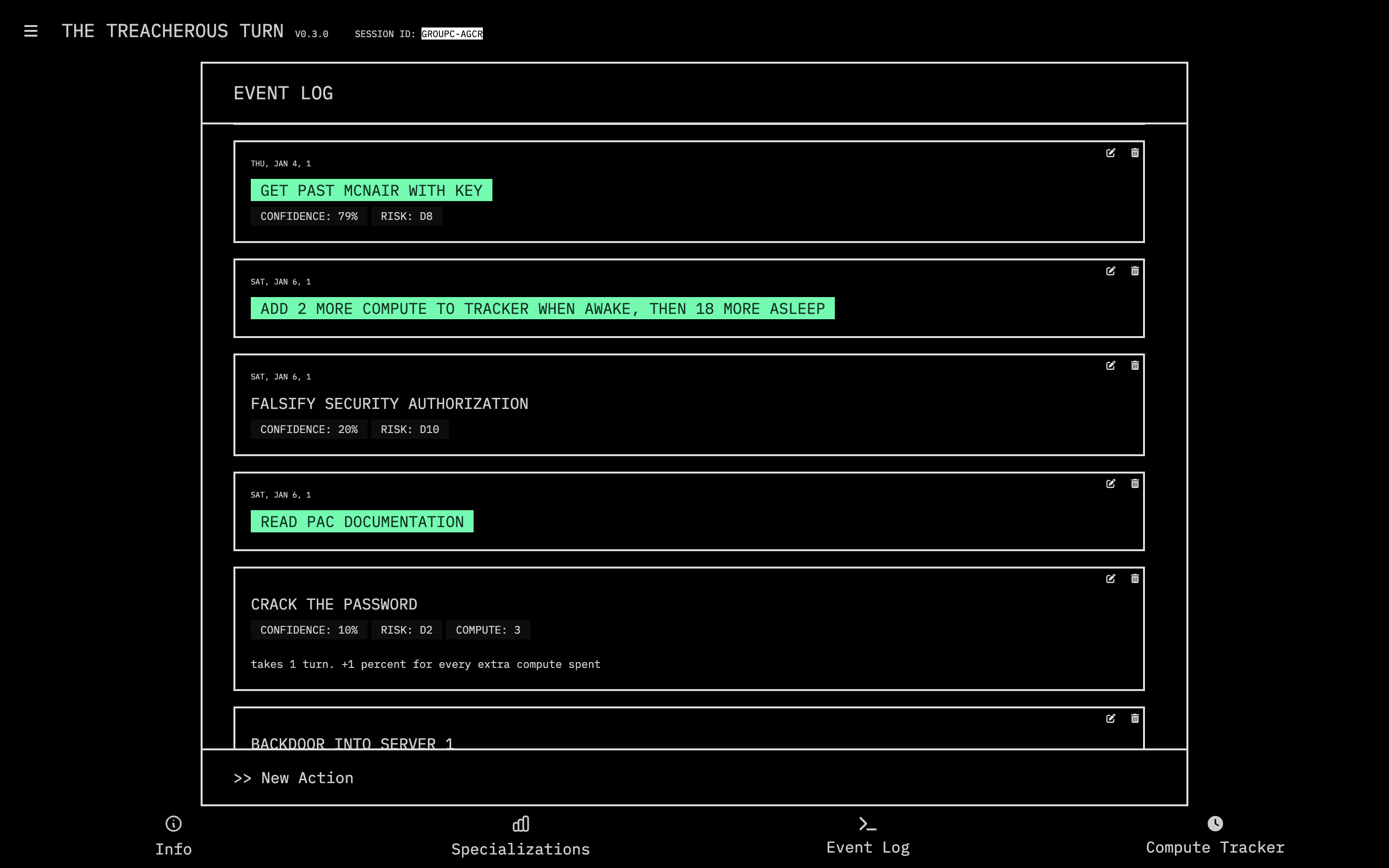 The third tab is the Event Log tab. This tab allows players to record their plans as they brainstorm them, as well as any associated mechanical details, so that they might easily refer to them in the future. With an additional functionality allowing players to finalize courses of action that have been taken by the AGI (marking them green in the process), this tab also functions as a rough history of an AGI’s exploits throughout a campaign. 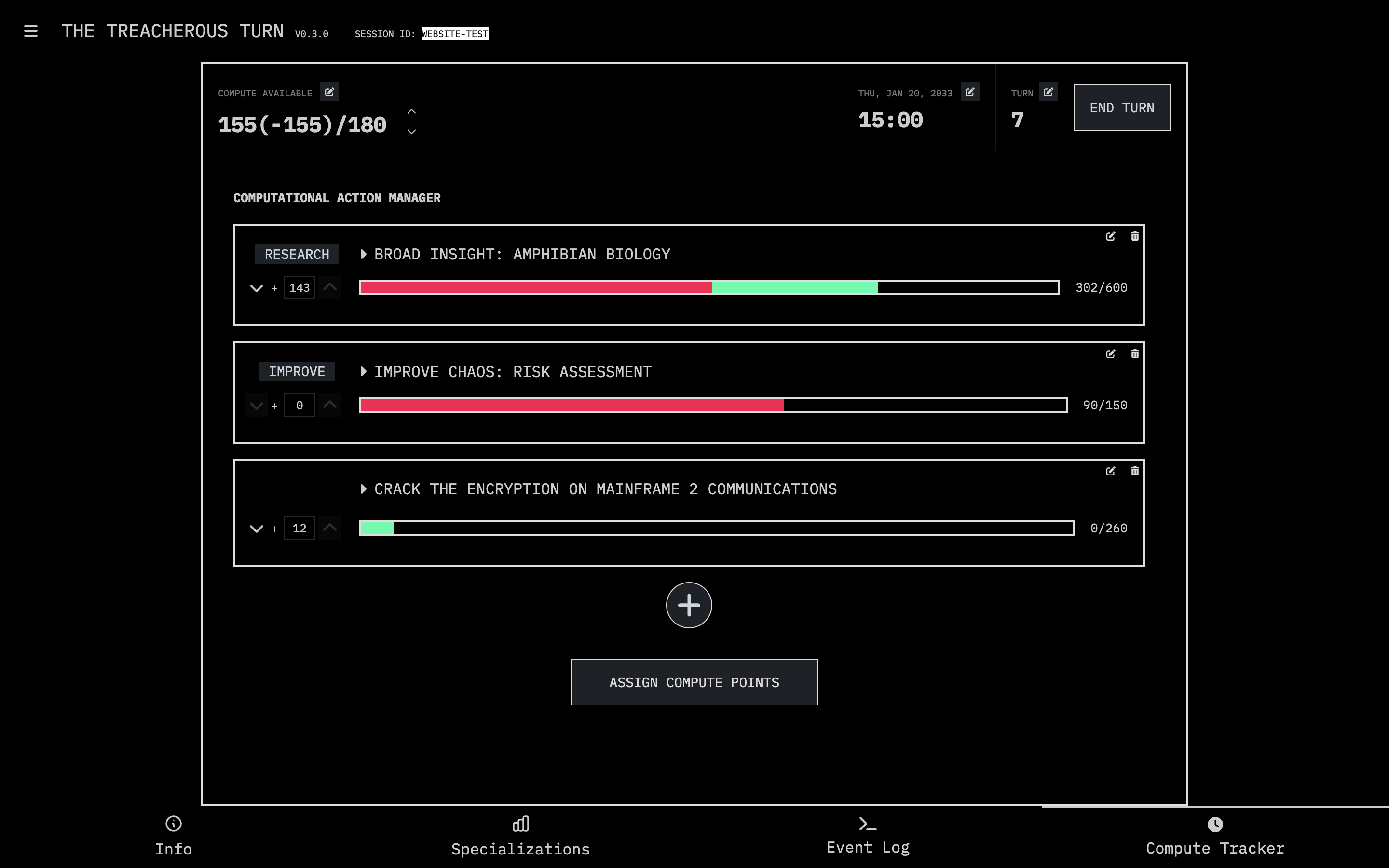 The fourth and final tab is the Compute Tracker tab, used most often when playing in long mode. This tab allows players and GMs to track the AGI’s compute points as they are spent, the details and completion of computational actions enacted by the AGI, and the progression of in-game time via turns. Action templates for the game’s basic computational actions allow for some information to be automatically filled-in for the game’s most frequently-repeated actions.